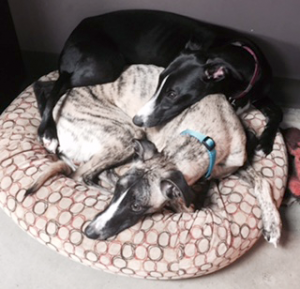 Tail Blazers was formed in 2000, in Calgary, AB, to address what we considered to be a major health crisis in dogs and cats. Our pets are living shorter lives with an ever increasing list of ailments, all linked to a poor diet. Many if not most of the commercial foods on the market today are, in our opinion, the cause of this health crisis.

Barton and John are the owners of the first Tail Blazers location in BC. Several years before they discovered Tail Blazers, they aspired to one day own a health food store for pets. They had already seen the difference that healthy food made to their fur babies – Pekinese/Shih Tzu (Jaxon), Shih Tzu (Lola),  a beautiful Russian Blue (Sophie). Finnegan and Sadie (both whippets) are now also part of the fur-family!

After switching all three of their pets to a raw food diet, Barton and John were delighted with the results and wanted to be able to share their success with others. The thing they both enjoy most about owning a Tail Blazers is hearing and seeing the improvements made in the lives of pets and because of this, find that their “job” is very rewarding!